The Transformer model learns how to align words in different languages. You won’t be training any weights here, so instead I’ve prepared some pre-trained aligned word embeddings from here. Run the cell below to load the embeddings and set up the rest of the notebook.

The scaled-dot product attention consists of two matrix multiplications and a softmax scaling as shown in the diagram below from Vaswani, et al. (2017). It takes three input matrices, the queries, keys, and values.

Mathematically, this is expressed as

where \(Q\), \(K\), and \(V\) are the queries, keys, and values matrices respectively, and \(d_k\) is the dimension of the keys. In practice, Q, K, and V all have the same dimensions. This form of attention is faster and more space-efficient than what you implemented before since it consists of only matrix multiplications instead of a learned feed-forward layer.

Conceptually, the first matrix multiplication is a measure of the similarity between the queries and the keys. This is transformed into weights using the softmax function. These weights are then applied to the values with the second matrix multiplication resulting in output attention vectors. Typically, decoder states are used as the queries while encoder states are the keys and values. 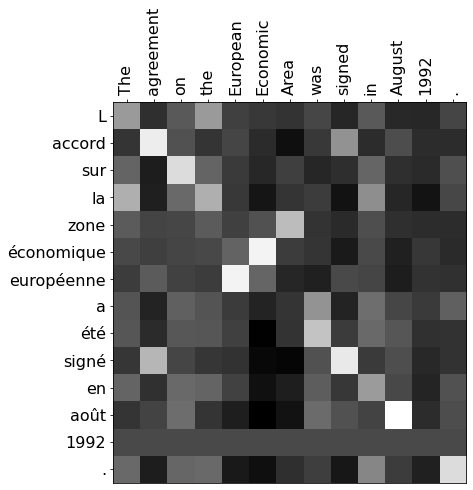 If you implemented the weights calculations correctly, the alignment matrix should look like this:

This is a demonstration of alignment where the model has learned which words in English correspond to words in French. For example, the words signed and signé have a large weight because they have the same meaning. Typically, these alignments are learned using linear layers in the model, but you’ve used pre-trained embeddings here.

Some elements of the attention_qkv function are